The 73rd Annual Illinois State BPA Annual Membership Meeting was held at the Marriott Hotel & Convention Center in Normal, Illinois, November 6 & 7. While we appreciated all the member centers that were in attendance, we also understand that not everyone is able to attend, so below is a quick recap of the meeting agenda.

Samuel Guy of USBC kicked things off the morning education program discussing USBC’s new Lane Certification Program that will begin in 2023. Samuel brought the new machine USBC inspectors will be using when certifying a center’s lanes. He told the audience of 50 people that within the next three years a USBC inspector will be coming to their center to inspect their lanes. USBC will notify centers with at least 90 days’ notice when they will be scheduling their center to inspect. Samuel said the time for inspecting the lanes will move a lot faster than in the past and inspectors can schedule at time prior to a center’s open time or after they close so it doesn’t interrupt business. There are four tiers – Gold, Silver, Bronze and Standard. A Gold rating is good for three years, a Silver is good for two years and Bronze is good for one year before the lanes need inspecting again. If a center receives a standard rating, they will have up to three years to improve their rating. If they receive a standard rating again, they will have to be inspected every year until they make it to one of the three above tiers.

Kelly Bednar of the BPAA Education Team presented two seminars – The Bigger Bottom Line and Hiring, Training and Recruiting Employees. Both seminars were well received by the 40 plus members in attendance and in his first seminar, Kelly showed the members attending several ways they can increase their revenue from “behind the foul line” in their centers. In his second seminar, Bednar taught ways to help centers hire new employees, retain their current employees, along with ways their current employees can help recruit new employees, as staffing major issue currently facing proprietors.

BPAA Executive Director Frank DeSocio provided a BPAA Industry Update to the Illinois members, where he showed a slide recognizing Illinois State BPA for being up four new member centers so far in 2022, the second highest in the nation among the 39 active state associations. DeSocio encouraged members to attend next year’s BPAA Summit in Savannah, GA in January and International Bowl Expo in Orlando, FL in June.

The ISBPA introduced Michael Best Strategies as the new ISBPA lobbyist starting officially on December 1. MBS is based headquartered in Wisconsin with other two offices including Chicago and Washington, DC. For the past several years they have been the national lobbyist group of the BPAA in Arlington, TX. This fall BPAA announced a $10,000 grant for state associations that have lobbyists in their state. ISBPA applied and was awarded with the $10,000 grant. This will help ISBPA save on lobbyist fees next year. 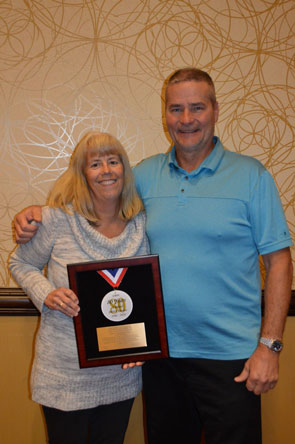 The ISBPA honored the Stutz Family, owners since 1985 of Circle Bowling Lanes in Forest Park, IL, for 80 consecutive years in BPAA/ISBPA membership.

Normally, the ISBPA recognizes a member when they reach their 50th anniversary of ISBPA membership, but this year ISBPA didn’t have a center reach that 50-year milestone. During Bowl Expo in Las Vegas this year, ISBPA Co-Executive Directors Chris Gallas and Bill Duff noticed in BPAA’s annual membership report that Circle Bowling Lanes was celebrating their 80th year in BPAA membership, which made them the longest tenured center in BPAA membership. Circle Bowling Lanes opened its doors on Saturday, June 7, 1941, which at the time no one knew, was exactly six months to the day before the Japanese attacked Pearl Harbor to start World War II. The center’s first newspaper ad from June of 1941, boasted it had 18 Bowling Lanes, a Men’s and Ladies’ locker room, and a Luncheonette. But listed as their most attractive feature was air conditioning, something we take for granted today, but back in 1941 that was an important modern amenity.

One fun fact of this award is that Illinois State BPA was started 73 years ago in 1949, which means Circle Bowling Lanes began operating 8 years prior to the creation of ISBPA. Bob and Denise Stutz were on hand to accept this award on behalf of their family members involved in running the center. The actual owners of the center are listed as Denise Stutz, Debby Marquardt, and Vicki Alberti, making Circle Bowling Center an all-female ownership group. In appreciation for their 80 consecutive years in membership, BPAA’s Frank DeSocio offered to pay the travel costs and registration for the Stutz family to attend Bowl Expo in Orlando, FL next June. 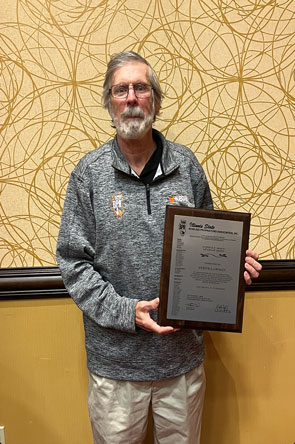 The Patrick F. Bosco Award of Merit honors an individual's substantial contributions to the sport of bowling that has impacted a local affiliates and/or the Illinois State BPA. This year's winner was Steve Lawson of Champaign, IL for his service to youth bowling throughout Illinois as a long-time tournament state director for the Pepsi Youth Championships, for serving as a Director and advocate for the Illinois USBC Youth Association, and most importantly for his collaboration and service as Tournament Manager for Kegel/ISBPA Midwest Collegiate Classic Tier 1 Tournament. 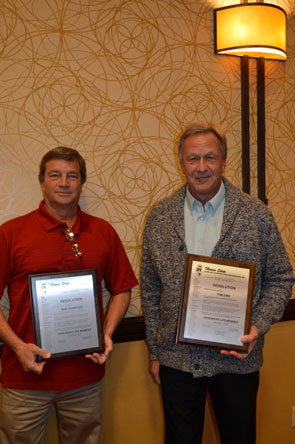 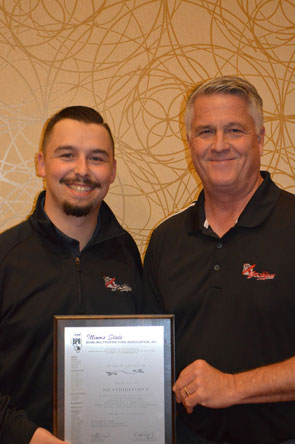 The ISBPA Award of Gratitude was started as a way the ISBPA could thank someone for their dedication of helping the sport of bowling and the ISBPA. This year’s winner, KR Strikeforce, was recognized for their assistance to our membership during the COVID pandemic in 2020 as their staff was key to helping ISBPA get our PPE Supplies out to our members during the shutdown. Mike Stout, co-owner of KR Strikeforce was on hand to accept the award for his company. 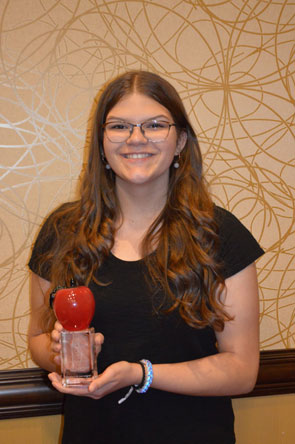 The first recipient, Lani Breedlove, is a senior at Oswego High School in Oswego, IL, where she currently holds a 4.30 out of 4.0 GPA and has made the honor roll every semester in her high school career. One of two Lani’s dreams is coming true as she recently was accepted to attend the University of Nebraska in Lincoln, NE next fall and bowl for the Husker’s women’s bowling team. She hopes to achieve her second dream, which is bowling professionally on the PWBA Women’s Tour after she earns her college degree.

The second recipient, Connor Weakley, is a senior at Lanphier High School in Springfield, IL, where he holds a 5.60 out of 4.0 GPA. Connor is a fourth-generation bowler in his family and one of his bowling goals is to be able to bowl a perfect 300-game just as his father and grandfather have already accomplished. Connor is a member of the Springfield Lanphier High School Bowling and Baseball teams. He is a member of the National Honor Society and made the Straight “A” Honor Roll in every semester. Connor will be attending Bradley University in Peoria, IL next fall. 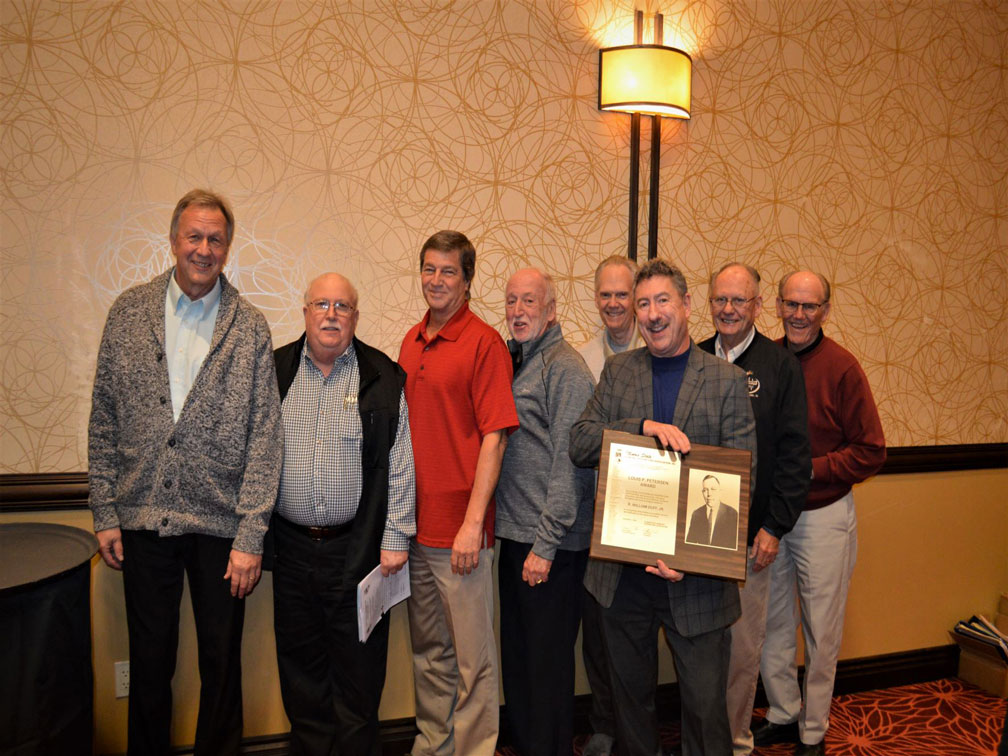 The ISBPA nominating committee decided to make the last award of the day, the Louis P. Petersen Award, which is presented to an individual residing in Illinois for recognition of their lifetime of unselfish service and dedication to the sport of bowling, a secret until the last possible second. No one was more surprised than the award winner himself, Bill Duff, who was recognized by the membership for his leadership and guidance of the ISBPA as Executive Director for the past quarter of a century. When Duff officially retires on July 1, 2023, he will be the longest tenured Executive Director of ISBPA at 26 years and is only the fifth Executive Director in the 74-year history of the association. All the past Louis P. Petersen Award winners attending the meeting joined Duff on stage for the presentation.

“No one is more than deserving of this award,” said Bluebird Lanes owner and past ISBPA president Bill Brennan. “Duff has done so much for this association for the last 25 years and he is the reason the Illinois State BPA has its reputation as the gold standard among active state bowling proprietor associations.”